Joined 6 mo ago
·
16 Posts
Has anyone learned more details about when they will be available for purchase? Any good online retailers to recommend?

Last I heard, a month or so ago, they were expected sometime in June. 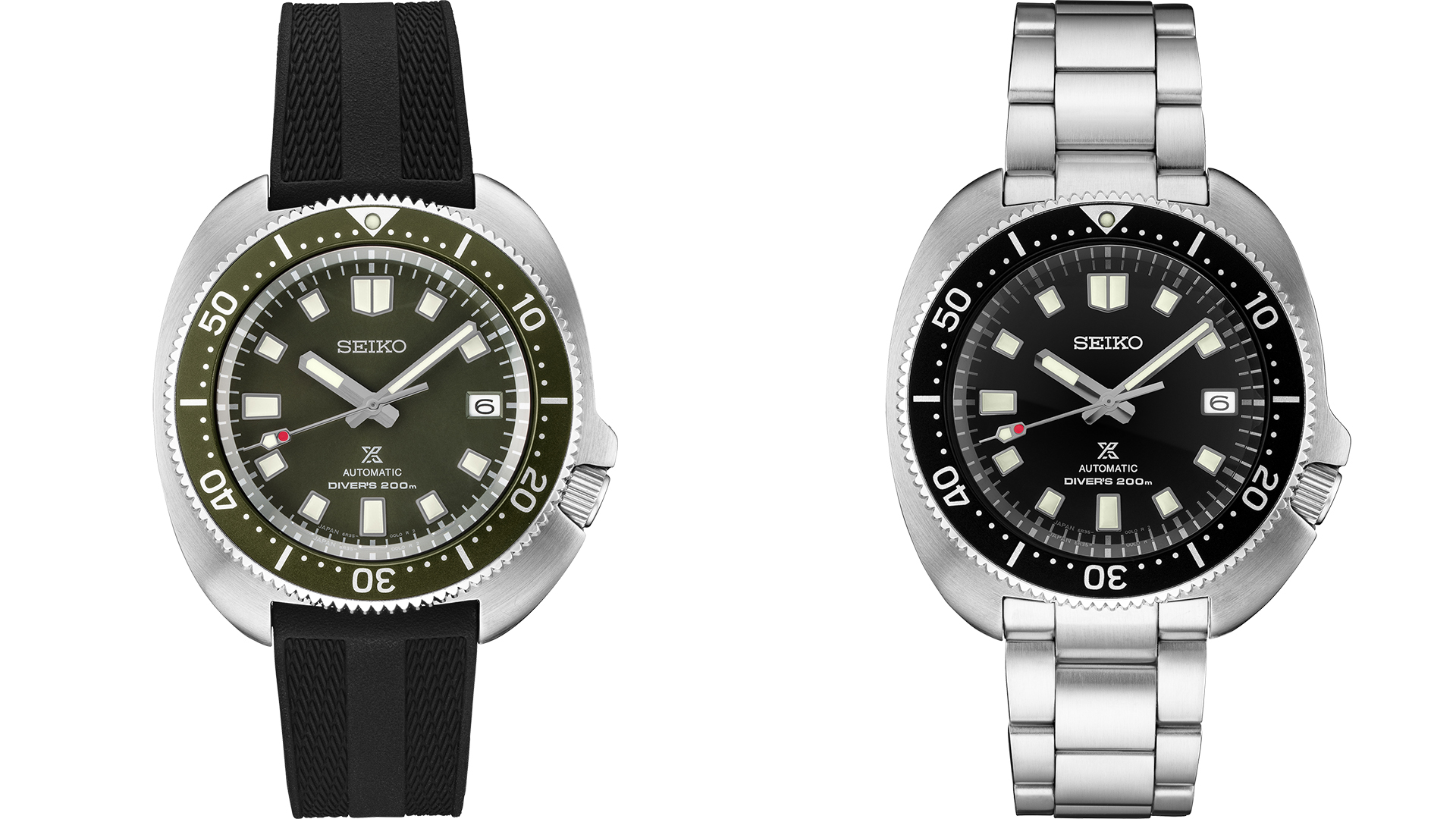 When it comes to historic Seiko dive watches, there’s no shortage of iconic models to choose from, ranging from the very first 62MAS diver all the way up to the ubiquitous and recently discontinued SKX007. However, perhaps none of these are as iconic or as instantly recognizable as the cushion...
www.ablogtowatch.com There are some watches in the Seiko-sphere that have truly outsized histories and reputations. And Seiko, in that way that Seiko does so well, has a tendency to tease their loyal followers, bringing back classic watches in fits and starts. The formula, at this point, is well known: a limited...

Whereas all the other articles I've seen say July, so I think HODINKEE just got it wrong.

Seiko also released a statement saying that the watches which they announced recently which haven't been released yet might be delayed due to COVID-19: Important notice regarding the timing of new product launches. | News | Seiko Watch Corporation
D

Joined Jan 4, 2013
·
5,915 Posts
I have one on pre-order at the Seiko Boutique and I asked as to when to expect it in. They are still closed since late March but the manager did email me back to say "we don't know when any shipments will resume."

Joined Feb 27, 2010
·
3,400 Posts
I found YouTuber Peter Kosta's review/comparison between the original 6105 and the subsequent Seiko reinterpretations quite interesting.

RussMurray said:
I found YouTuber Peter Kosta's review/comparison between the original 6105 and the subsequent Seiko reinterpretations quite interesting.

Dammit Russ that review just about has me canceling my pre-order.

What a brilliant job he did there on the review video. Great stuff.
3

Grammarofdesign said:
Dammit Russ that review just about has me canceling my pre-order.

What a brilliant job he did there on the review video. Great stuff.
Click to expand...

I hear ya. It's certainly given me pause as well. For me his observation that the latest rendition has a case shape that is more elongated than the round design of the 6105 is particulalrly disconcerting. Might be better off pursuing a good vintage 6105....the price is comparable anyway.

I had not seen Peter Kotsa's reviews before but based on seeing some his other offerings, I'd say he's a guy to watch.

Joined Feb 27, 2010
·
3,400 Posts
Further this discussion. Other folks in other forums have questioned this YouTuber's perspective since he may not have the SPB 151/153 actually in hand. That's fair enough and we all know about opinions. eh?

I've been down this rabbit hole before. I have a number of 6309's & 1 6306 in my collection and to me, they are the iconic Seiko diver with 6105 running a close second. When Seiko released the SRP reissues, I jumped on board thinking how nice it would be to have a new watch with modern movements so that I could wear it worry free etc. Fact is however, I'm pretty easy on my watches anyway and eventually that SRP773 became surplus to my needs.

So here we are, presented with yet another interpretation of the 6105 and kudos to Seiko for putting it out there. I have a slightly modified vintage 6105 (aka Mr Crusty) that I wear occasionally and a Typhoon that Jake made to scratch the 6105 itch and kudos to him too for putting it out there. As far as pricing goes, I suspect you can pick up a well cared for/restored vintage for what these SPB's go for. So it's a bit of a toss up. This review focusing on the case shape is what piqued my interest. Whether it's accurate or not, I don't know.

Bottom line for me is to determine whether I'm more curious than itchy Guess I'll have to wear my 6105 & Typhoon more often to diagnose my symptoms. For what it's worth, I like the green dial. Time will tell and I'm in no rush but we all know that such logic is precarious at best when you're an idiot.

Joined Apr 2, 2010
·
1,660 Posts
hrrrmmmmm that video is going to make me learn towards buying a used one instead of having that brand spanking new one. i was "thinking" of buying one for each son as well, but maybe not now. LOL. they can have a nice SRP now, not that either of them are into watches at the moment.

that case study is really what puts me off the most. i was going to get both colors, but if anything, will lean towards the green one first just because it's different.

Joined May 5, 2010
·
121 Posts
Thanks to the OP for the link that was well worth watching. This is all just my 2 cents as it were; I am looking forward to a SPB153, such a distinctive look and a nice rendition IMO I have a vintage Benrus strap I plan to wear it on. Having just sold two 6105s and still owning one, I do not see ever buying an SLA unless it is an "I can't refuse deal" second hand. My new Pepsi Turtle has totally replaced my last remaining 6309, I fitted a 6309 heavy oyster bracelet to the new Turtle, quite a lot of shaping to the trim pieces, but I could not stand the OEM bracelet for the watch. I do not currently have any vintage watches in rotation and I do not see that changing, service work is such a PITA these days, parts are astronomical $$. My 6309 is from 1984 and has never opened, still runs surprisingly well, I am hoping my new Seikos will fare as well. The pictured baby blue Tuna was an impulse purchase on a wedding anniversary trip to St Thomas and was my first "brand new" Seiko purchase in ages (since the 80s), it is in rotation and get's a lot of love, lol.

It dawned on me, there is no one 'fatal flaw' and in fact each item (dial execution, crown guard shape, hand set, size) would be fine by itself. But add them up and then having to spend well over $1000 and you know what, those watch buying dollars are just going to go towards something else.

Grammarofdesign said:
I have been thinking over why suddenly the bloom is off the rose for me.

It dawned on me, there is no one 'fatal flaw' and in fact each item (dial execution, crown guard shape, hand set, size) would be fine by itself. But add them up and then having to spend well over $1000 and you know what, those watch buying dollars are just going to go towards something else.

I can understand your perspective there Jon. It would appear that you've pretty much got all the bases covered anyway. As you say, those scheckels could be spent on something different.
R

They are so busy making so many variations how about just one as the classic.
And did they have to ruin and downgrade the SKX line?

When the Swiss are kicking their ass on entry and mid level auto divers feature and price wise things have gone astray.

Almost none of the Swiss can compete with Rolex, why do they think they can?
They have the baggage of a ton of **** level bottom feeder market watches with the same brand name. Rolex has a different brand name for their associated mid level line.

The WHOLE entire popularity and desire for Seiko auto divers is based on how much quality you get for comparatively lower prices. The market for expensive limited editions and reimagined retro inspired is a fraction of the market for true modern re-releases of updated models.

The interest in highly priced quartz analog and expensive ways to mechanically generate electricity to power a quartz oscillator which provides amazing accuracy for a mostly mechanical watch, but kind of kills the whole point of having a mechanical without electric power involvement.

When you start getting innovative and fancy looking just for the sake of it, stuff goes wrong.
Like Seiko and the 6309, the Beretta 92 was a darling of the late 1970s to mid 1990s.
Then instead of making a true compact version, or a compatible subcompact version, or a polymer framed version,
they came out with the Cougar. Same manual of arms, but incompatible magazines, and a rotating barrel nobody cared about. It failed.
So then they came out with a subcompact, different manual of arms, purported magazine compatibility that really wasn’t, super styling, horrible ergonomics, horrible trigger, deteriorating grip, and issues with early released versions. It failed.
So then they came out with super styling, slippery grip, stupidly named 90-two with updates that lost some legacy frame/upper compatibility same magazines, at least, but it failed.
So then they combines the failed concepts of edgy styling, rotating barrel, magazine incompatibility, and slippery grip, and obviously the line, the PX4, failed to get any serious interest and they stubbornly cling to the line on life support.
Then, with decades to master things, come out with an edgy styled, striker fired gun with magazine incompatibility, the APX, currently on fire sale with rebates.

The only significant interest in Beretta pistols currently, still far less than it could have been, because CZ stepped in to fill the niche much as citizen and orient and homage microbrands have stepped in on a Seiko, is when Wilson Combat finally got them to update what the market wanted from the 92, followed by Langdon Tactical, and now their own performance line versions.

RussMurray said:
I can understand your perspective there Jon. It would appear that you've pretty much got all the bases covered anyway. As you say, those scheckels could be spent on something different.
Click to expand...

I'm thinking the SARX Presage series tribute to the Crown Chronograph might be a good option.
K

Joined Sep 18, 2016
·
2,088 Posts
They really screwed over the SLA033 buyers with this release. I wonder how those buyers must feel right now who thought they bought something unique and special (with the according premium for that)

koekoek said:
They really screwed over the SLA033 buyers with this release. I wonder how those buyers must feel right now who thought they bought something unique and special (with the according premium for that)
Click to expand...

Much like the Rolex crowd when a previously precious metal only model suddenly goes to being available in stainless steel, too.

koekoek said:
They really screwed over the SLA033 buyers with this release. I wonder how those buyers must feel right now who thought they bought something unique and special (with the according premium for that)
Click to expand...

actually, i don't feel screwed over at all. i got a great price and love the watch. it is alot different than the soon to be released watches. would i buy the -033 again, yeah, I would - i might wait a little longer, but I'd buy it. you only live once annnnnd my dial doesn't have the "X" on it. LOL.