Joined Apr 4, 2010
·
1,819 Posts
I recently had the opportunity to travel to Japan again for work and managed to pick up a number of items during my time there.

I only picked up a couple of new pieces but I have been quite happy with these.

My first purchase was the 50th Anniversary SDGZ013, these were selling out quickly and I was glad to pick one up. After my first weekend in Tokyo most of the units had sold out so I was glad to grab one.

I was inspired to get this after seeing the post here by Merly. This is a LE of 500 units and my example is just 3 from the one Merly posted.

This comes with a bracelet as well as a nice cordovan strap.

When I purchased this I also was given a promotional Brightz metal shoehorn.

Next up was a SCED023 Giugiaro Spirit.

These are a LE with 2,500 pieces, so not particularly hard to find but a nice homage to the original “Aliens” models.

This will make a nice addition to the SCED003 LE of 500 that I already had.

I also picked up numerous brochures and an Orient 2015 desk calendar.

In addition to new items I also found a number of items at second-hand and pawn stores.

This came with all the boxes, manuals and even the tags on the strap and did not seem to have ever been worn.

This is a very large watch and feels bigger on the wrist than my Zilla. I do really like the large and solid buckle on it. The strap also has a slightly larger end that stops it just sliding through the keepers and gives an extra level of security.

It was a very distinctive model with the silver dome in the centre of the crystal. This one has a few small scratches on the crystal and I will also replace the capacitor. It has a Ti case and bracelet and very light on the wrist.

I also got this blue 5M43-0C30 diver that I had not seen before. The bracelet has solid outer links but the centre links are hollow.

The last watch from a second hand store was this Citizen 61-0836. It is in great condition and has a really nice faceted crystal that I am always a sucker for.


While the watch was in great condition and I thought a good buy for $58, this was not the main reason that I purchased this. I am sure some people will spot what drew my attention to this.

In addition to the watches I also found a box set for my Citizen Japan Rail 100th Anniversary watch.

This came with the outer and inner boxes as well as a postcard with details about the D51 train. I paid $33 for this.

This is the watch I already had that goes with the box.

I also found some Citizen cube display stands for just a few dollars.

Lastly I found this promotional Seiko Wrist Calendar from 1978. This comes with a series of metal pieces that can be wrapped around the band and shows the calendar for the month.

It is missing the July month as I assume that this was used as a demo.

I also picked up a few watches at some local flea markets but I will include these in another post.
R

Joined Dec 17, 2010
·
235 Posts
A-Well it sure looks like your living the watch
Hobbyists Dream and coming home with some very nice and very prized watches. Congrats, seems to me you are WIS of very good judgment.Well done!- Eli

Joined Nov 25, 2013
·
1,630 Posts
How do you get all of that on the airplane on the way back? I whish I could travel like I use to. I would love to spend a week in Tokyo watch shopping. When I was a youngster we would go into new York City and hit all the appliance stores and pawn shops. Man the deals you could find and everything was negotiable. That's how I bought my fist home CD player. The salesman gave me his whole sales pitch. My girlfriend was standing next to me just waiting to get out of the stereo shop and on to the next shoe store just staring bored. When he was done I looked at her and then I told him 'you didn't impress her" he said Oh well how about if I take $30 buck of the sale price. I said SOLD! The same unit would have cost me at least $100 bucks more where I live in Connecticut.

What is the Orient shown on the March page of the calendar ?

akable said:
I also got this blue 5M43-0C30 diver that I had not seen before. The bracelet has solid outer links but the centre links are hollow.
Click to expand...

I've always had a soft spot for these (SBCZ007J)... Mostly because it was also the basis of the elusive Shimano Dura-Ace 25th Anniversary watch: 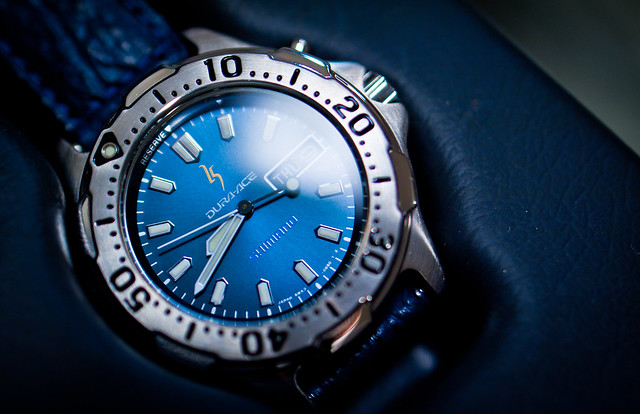 Great pick ups, the 50th Anniv edition looks superb. I have had the 5j22 ti for around 15 years and it is such a great daily beater, it is very light and you do forget it is on your wrist.

Do you frequent any particular region or store?

Joined Feb 5, 2015
·
12 Posts
Wow that's what I call watch shopping. You just gave me a good reason to visit Japan for my next holiday. Enjoy your new acquisitions.

Joined Nov 25, 2014
·
529 Posts
Excellent pickups! Is that an Orient Clubman Chrono in the calendar?

Joined Jul 16, 2010
·
267 Posts
Outstanding trip! Congrats!
Where did you find those second hand or pawn stores? Do you recommend any?

There is not any specific locations in Tokyo that I go when looking for watches. I generally just pick a train line head out to a suburb and wander aimlessly checking out the local area and dropping into any secondhand store that I fine. As anyone who has been to Japan knows these are fairly common and have a wide mix of goods.

The only watch that I got outside of the greater Tokyo region was the BN2025-02E. I found this at a secondhand store in Hon-Atsugi (~ hour south of Tokyo) where I travel for work.

I am surprised that no one has commented on the reason I was so excited to get the 70's Citizen 61-0836.


TheTigerUK said:
What is the Orient shown on the March page of the calendar ?
Click to expand...

The March Orient is the WV0021TY from the Neo 70's Horizon range. This model is a quartz solar model. -> Orient-Watch.jp


Slonie said:
I've always had a soft spot for these (SBCZ007J)... Mostly because it was also the basis of the elusive Shimano Dura-Ace 25th Anniversary watch
Click to expand...

Thanks for the model number as I was not able to find this earlier. The Shimano 25th is a nice looking watch and that photo really shows off the blue dial. I am not into cycling but the Dura-Ace Anniversary groupset looks like a nice Special Edition.

Joined Apr 4, 2010
·
1,819 Posts
As some people were interested in the Orient Calendar I have done a quick scan of it and posted a copy in the Ads and Catalogs (Vintage & Current) forum.
B

Joined Jun 29, 2012
·
638 Posts
Anthony, that LE is phenomenal. I wish I hadn't seen it since I'll never be able to find/afford one. Forgive me if there have been other posts about this, but is it explicitly modeled after either the 6138 Panda or the 7018-7000? After a long-time searching I finally found one of the latter (unusual fly-back single register with a Sapphire crystal), and it looks awfully similar aside from missing registers. Even down to the red-tipped second hand.

I particularly enjoy the irony of this watch... an example of the apex of the mechanical era branded with a battery company .

Joined Oct 19, 2014
·
3,923 Posts
:sign0098:Congratulations on the fantastic watch buying trip and thinking about work in your spare time ! Just kidding...actually that is the way business trips should go. Watch collecting is serious business. The SDGZ is beautiful and a grail for any Seiko collection, wear it with pride !

Thanks for sharing your new acquisitions, I'm looking forward to seeing your "flea market finds" when you get a chance to post them !

Joined Dec 29, 2013
·
221 Posts
Congrats on your nice haul. Glad I could inspire you and funny to see your LE number is that close to mine.
Still love my sdgz. It is my favorite together with my mm300. Enjoy yours!
1 - 20 of 31 Posts
Join the discussion
Continue with Facebook
Continue with Google
or sign up with email
About this Discussion
30 Replies
24 Participants
Last post:
Sweephand Mar 10, 2015
The Watch Site
A forum community dedicated to Watch owners and enthusiasts. Come join the discussion about brands, troubleshooting, repairs, reviews, accessories, classifieds, and more!
Full Forum Listing
Explore Our Forums
THE JAPANESE WATCH DISCUSSION FORUM SEIKO & CITIZEN TRADING POST WATCHMAKING & TINKERING NON-JAPANESE WATCH DISCUSSION Seiko Reviews
Recommended Communities