Joined 1 mo ago
·
7 Posts
Hi all,
I've been lurking for a while now, finding lots of really usuful information that already been posted, thank you everyone for that it been invaluable!
I've been tinkering for a short while and am by no means proficient yet..

I've stripped down a 6309a movement, my first Automatic, cleaned and have started reassembly.

Had real difficulty getting the Barrel Arbor on to the new MS, which I've not had on other Movements.. couple of hours and lot of swearing later it was on.
The first concern was that there is no handwinding function so I couldn't really test if the MS/Barrel/Arbor were working correctly until the end..

Once fully assembled the watch won't fire up, the balance swings freely but it's clearly not getting any power from the barrel...

Having pulled off the Automatic gear again I found that I could move the barrel slowly with a bit of pressure to the outside gear.. the balance immediately swung into life.

Couple if questions if anyone could help me with it would be much appreciated:

Does this sound like I've cocked up the the barrel/MS/Arbor reassembly?

Could the click works be causing the spring not to wind? (Looks like it's on right but could be wrong)

Could this be a Automatic winding problem?

Is there a way to test the barrel assembly during rebuild to ensure its functioning correctly?

Sorry about the length of this post, I'm thinking of buying a new Barrel, Arbor and MS just to rule it out, but thought it wise to ask some advice first!

Joined Dec 14, 2017
·
4,659 Posts
You can hand wind it by turning the arbor screw clockwise with a screw driver. You can also check the train with the pallet fork removed. Everything should move easily with a light touch on the mainspring barrel. Dont force anything. Double check to be sure the pinions are seated in the jewels properly. Watch the gears and escape wheel as it spins, look for any wobble. The gears should spin nice and level. Check the mainspring barrel for any play while installed, it shouldn't have much if any.

Joined 1 mo ago
·
7 Posts
Thank you for the reply, I've part torn it down again, tested the barrel and I can feel the spring jumping/skipping after about a quarter turn.

Took the barrel apart again, struggled like hell to get the Arbor back in for another hour before it decided it liked flying! Dam... New one on order from cousins. This barrel and Arbor might just be the death of me! Haha
I

Joined Jul 2, 2015
·
1,700 Posts
OK the secret to putting in the arbor us to sit the barrel on a small anvil and make sure the hole you are sitting the barrel on is larger than the diameter of the arbor. You will be able to simply push/slight wiggle the arbor into place and then rotate it backwards to engage the tang of the arbor with the hole in the mainsprin.

If you are trying to do this on a bench mat you will be pushing all day to try and get the arbor into position.

Joined 1 mo ago
·
7 Posts
Thank you, I will have to order something like that

You don't need an anvil - just hold the barrel in your fingers and use a pair of D tweezers to hold the arbor and rotate it backwards into the spring.
That's the way I always do it.

Joined 1 mo ago
·
7 Posts
I'm not sure what D tweezers are? Sorry.. definitely up for trying an alternative method as this isn't working for me at present

Joined Feb 25, 2019
·
1,237 Posts
Did you draw a picture of the MS curve so you can wind the spring In the correct direction? Maybe you have it in backwards.

Test the MS by rotating the screw on top of the barrel ratchet wheel prior to installing the palette fork and visualize the power transmission through the train of gears.

Fraczish said:
I'm not sure what D tweezers are? Sorry.. definitely up for trying an alternative method as this isn't working for me at present
Click to expand... 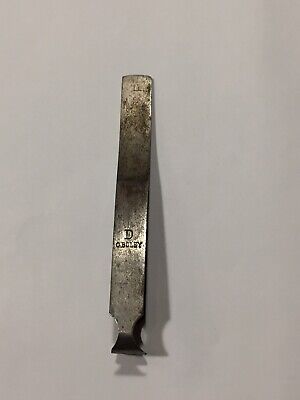 I have not clean these tweezers, I'll leave that to you. Condition is Pre-owned.
www.ebay.com

You might find good hardware stores have them.
I

nzwatchdoctor said:
You don't need an anvil - just hold the barrel in your fingers and use a pair of D tweezers to hold the arbor and rotate it backwards into the spring.
That's the way I always do it.
Click to expand...

I use to hold the barrel in my fingers (with finger cots on) but found it easier to use an anvil and the arbor will drop in every time . Not only that the anvil is a tool I use constantly, working on movement parts, hands, supporting the barrel when you drop in a mainspring using a main spring winder. At the end of the day you will find a method that works for you.

Joined Nov 12, 2018
·
482 Posts
I don't have an anvil yet but use the base of one of those cheapy barrel closers. Being plastic it doesn't risk marking the barrel though I guess there may well be downsides I haven't thought of

Sent from my Pixel 3a XL using Tapatalk

Joined 1 mo ago
·
7 Posts
Having got it broken down, indeed the MS was the wrong way round ( my bad) fitted a new MS and Arbor, no difficulty fitting (surprise surprise).
Only difficulty I'm having now is that the barrel seems to have too much play, when wound and under tension it sits at an angle, the edge engaging the centre wheel (?) rises up which causes the opposite side to foul the mainplate and the watch then stops. If I lever the barrel up a touch it starts again.
Could this be a damaged barrel due to me fighting with the upside down MS or could it be a mainplate issue? I've seen some posts somewhere about adding jewels for the barrel Arbor but not sure if these are effected.

The watch ran pre service all be it quite erratically.
B

Joined Feb 25, 2019
·
1,237 Posts
Make sure the MS barrel cap is snapped securely in place. The cap should fit flush with the barrel edge all the way around. I have opened a few watches and the barrel cap was coming away from the barrel. Also check for wear in the lower barrel arbor port in the main plate. If it looks oval in shape and most do this may allow the barrel to tip as you described. Are there any brass wear marks in the main plate or on top of the train bridge where the barrel or ratchet wheel have been tipping or rubbing a wear mark in the plates. If so arbor port wear is excessive and will have to be dealt with for the watch to run properly.


Sent from my iPhone using Tapatalk

Joined Dec 14, 2017
·
4,659 Posts
It wouldn't be the barrel itself if its together right. The 3 points of contact are the mainplate, bridge, and arbor, one or more of the 3 are worn. The easiest thing to try is another arbor if you have a spare.

Joined 1 mo ago
·
7 Posts
Thanks guys, I certainly didn't see any wear to the plate or bridge. I've looked back at the pictures I took and again can see any on the main plate.
The Arbor is brand new.
I will double check the lid when I have the opportunity to drop the movement out.

Joined Dec 14, 2017
·
4,659 Posts
It could be the barrel or cap is worn, my mistake there 3 contact points, there is actually 5 if you count where the arbor makes contact with the barrel and cap.
1 - 19 of 19 Posts
Join the discussion
Continue with Facebook
Continue with Google
or sign up with email
Recommended Reading
Read More
Read More
About this Discussion
18 Replies
8 Participants
Last post:
zeke441 25 d ago
The Watch Site
A forum community dedicated to Watch owners and enthusiasts. Come join the discussion about brands, troubleshooting, repairs, reviews, accessories, classifieds, and more!
Full Forum Listing
Explore Our Forums
THE JAPANESE WATCH DISCUSSION FORUM SEIKO & CITIZEN TRADING POST OFF-TOPIC WATCHMAKING & TINKERING NON-JAPANESE WATCH DISCUSSION
Popular Communities