The 6106-7107 was Seiko’s first orange diver. The dial is the star of the show with the raised monument style markers and rotating internal bezel. The catalog described the dial color as “Aztec Red”, and it does somewhat match the ochre pigment used on Mesoamerican pottery.

The 6106-7107 was originally introduced in 1969, and was featured prominently on this brochure cover advertising Seiko’s lineup of that same year.

The hands are rectangular and have a black stripe running down the middle. The second hand is triangular and painted a shade of orange that is maddingly very close to that of the dial. If the second hand is original, it fluoresces bright orange when exposed to UV light.

Although its main claim to fame is its orange colored dial, at least one 6106-7107 has surfaced sporting a white dial.

The 6106-7107's bracelet seems to be unique to it. Sadly the bracelet does not always age well, so finding one in good, restorable, condition is not always possible. I was lucky enough to run across a NOS one during my restoration. It came without endpieces, but a little work with some 2mm tubing and a dremel did the trick.


A black variant of the same design was issued as the 6119-7160. Although the the last two digits of the case numbers differ, the case dimensions are absolutely identical. The only differences are the black dial color, the 6119B movement, a high contrast red second hand, and the 7160s razor bracelet. While not as flashy as its orange brother, it is far more rare. After waiting for over a year for one to come up on ebay, I finally gave up looking for an intact one assembled my own over a few months from bits and parts I was able to scrape together from four different sellers.

Seiko designs for its 6106-7107 and 6119-7160 Sports Divers have been accused of being inspired by Doxa. It’s hard not to agree given Seiko’s use of similar bright colors and dial marker designs.

Doxa however, does not have the raised monument markers of the Seiko 6106-7107 and 6119-7160 Sports Divers, making the Doxa dial look flat by comparison.

In addition, all of Seiko’s 70 meter Sport Divers are freer in their styling and take themselves less seriously than the Doxa professional ISO rated divers of the same years. The Seiko designers, in a spurt of creative energy, created funky dials, UFO cases and radical bracelets that together aspired to be pop or mod art pieces, very much in tune with their times.

► Show Full Signature
“Do not spoil what you have by desiring what you have not; remember that what you now have was once among the things you only hoped for.”

Joined Feb 8, 2016
·
1,655 Posts
Thanks, I would appreciate any comments or corrections, along with any pictures from your own collections.
► Show Full Signature
“Do not spoil what you have by desiring what you have not; remember that what you now have was once among the things you only hoped for.”

Joined Dec 8, 2017
·
4 Posts
Thanks, that made for a very interesting read, that's a lovely looking watch, very much to my taste.


Sent from my Swift 2 Plus using Tapatalk
K

Seiko Hoarder said:
Thanks, I would appreciate any comments or corrections, along with any pictures from your own collections.
Click to expand...

I wish i could post some own pictures but sadly i dont have one.
G

Seiko Hoarder said:
Thanks, I would appreciate any comments or corrections, along with any pictures from your own collections.
Click to expand...

Joined May 28, 2012
·
8,340 Posts
fantastic. Love the watches and bracelets - thanks for sharing !
► Show Full Signature
Salvation will not come from the rushing centers of civilization, deliverance will come from the lonely places - Fridtjof Wedel-Jarlsberg Nansen


Sent from my iPhone using Tapatalk
► Show Full Signature
Collector of Seiko, Citizen, Bulova, Hamilton, Omega...
"What do you care about what other people think" - Richard P. Feynman
Philippians 4:8 - Finally, brethren, whatever is true, whatever is honorable, whatever is right, whatever is pure, whatever is lovely, whatever is of good repute, if there is any excellence and if anything worthy of praise, dwell on these things.

Joined Apr 26, 2011
·
2,749 Posts
When I saw the title of thread I thought the post would have some connection to San Diego State but your write-up was excellent nonetheless. I appreciate your thoroughness in sharing information as well as your effort in putting together a complete black dialled version. I haven't been at my bench in some time so I feel the need to live vicariously through good folks such as yourself.

The one in my collection has a somewhat unique patina on the dial with the brighter orange still visible between the indices and the larger are of the dial showing a more muted shade. The difficulty in easily discerning the seconds hand led me to repainting mine as you can see. As someone who came to adulthood in the '70s the Seiko sport divers really appeal to both my nostalgic and aesthetic sensibilities. 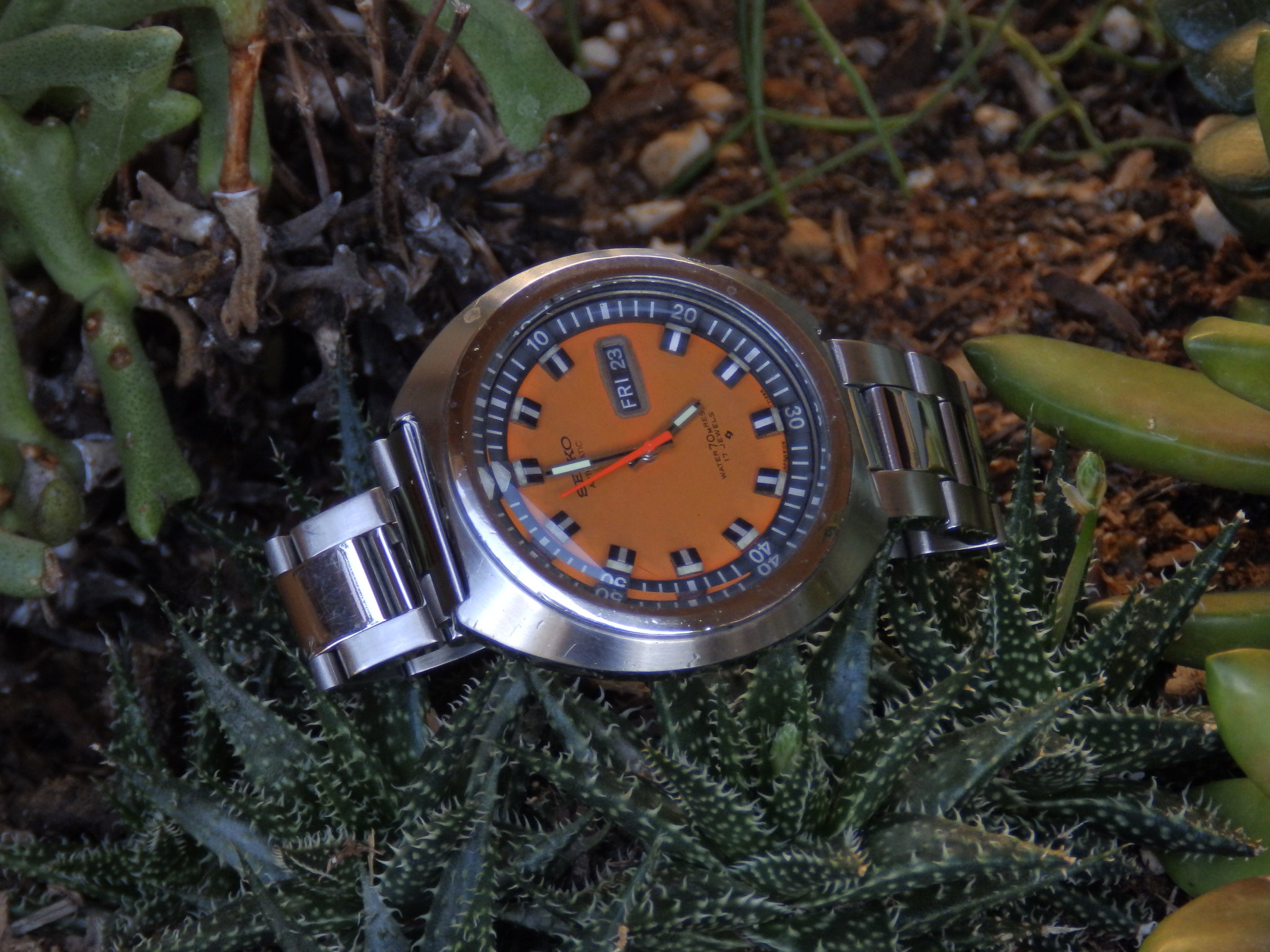